The procedure and general rules for recognizing a trademark as well-known in the Republic of Kazakhstan. 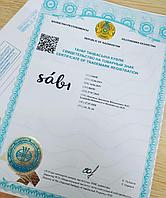 For trademarks with well-known status, it becomes possible to prohibit any use of the designation in relation to all goods and services specified in the International Classification of Goods and Services (ICGS). At the same time, there will be no need for right holders to register a trademark in a new way every time they have new types of goods and services. Obtaining recognition of a trademark as well-known will prevent any copying of it by third parties for advertising and promoting other's goods and services.

It should be noted that in order to recognize a trademark as well-known, it is mandatory to conduct a consumer survey, which must be carried out by a specialized independent organization. Information on the actual recognition of a trademark as well-known is confirmed by the results of such a survey of consumers in the territory of the Republic of Kazakhstan. The survey should cover the following cities:

For consumer goods, the survey is conducted among "average" consumers (based on gender, age, education, social and material status), as well as among specialists in the relevant industries and trade.

For goods for industrial and technical purposes, the survey is carried out among specialists in production, trade or other business circles who are consumers of this type of product.

When preparing the evidence base of the well-known trademark, the following data and materials, for example, may also be provided:

- documentary evidence of active use of the trademark;

- data on the average annual number of consumers of goods with this trademark;

- information on advertising costs and confirmation of its intensity in accordance with the data of the annual financial statements;

- data on the intensive use of the trademark on the territory of the Republic of Kazakhstan (coverage of specific territories, terms of use);

- ways of using the trademark;

- data on the volume of sales of goods with a given trademark and distribution channels;

- data on the value of the trademark;

- data on the intensity of trademark advertising (in the media, at exhibitions, fairs);

- data on the number of licensees, manufacturers, distributors, importers, sellers;

- data on the degree of popularity of the trademark - local, regional, in neighboring states, worldwide;

- data on the availability of trademark registrations abroad;

The materials presented should really demonstrate that the owner of the mark has made a lot of efforts to popularize his brand, and the mark is really known so much that when it is used by other manufacturers in any area, the consumer will be misled.

The procedures for filing, publishing, examining and registering an application for recognizing a trademark as well-known takes place according to the table below.

Additional time is required to prepare the consumer survey - approximately one month. In addition, the commission can change the period for consideration of the application.

·       Any additional costs:  Depends on applicant's amendments or response to objections from third parties.